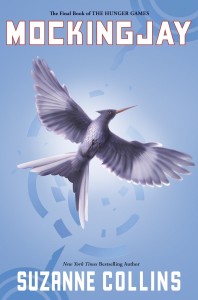 So this is a book I’ve been waiting to read for a long time (ever since I finished “Catching Fire).  It didn’t disappoint.  I have loved this series, even though when I describe the premise to people a lot of them are a little taken aback at first.  I mean, a story about choosing children to go compete in a battle to the death isn’t exactly light and fluffy.  But then, I enjoyed reading “The Lord of the Flies” too.

Here is the blurb from the jacket:  Katniss Everdeen, girl on fire, has survived, even though her home has been destroyed.  Gale has escaped.  Katniss’s family is safe.  Peeta has been captured by the Capitol.  District 13 really does exist.  There are rebels.  There are new leaders.  A revolution is unfolding.  It is by design that Katniss was rescued from the arena in teh cruel and haunting Quarter Quell, and it is by design that she has long been part of the revolution without knowing it.  District 13 has come out of the shadows and is plotting to overthrow the Capitol.  Everyone, it seems, has had a hand in the carefully laid plans — except Katniss.  The success of the rebellion hinges on Katniss’s willingness to be a pawn, to accept responsibility for countless lives, adn to change the course of the future of Panem.  To do this, she must put aside her feelings of anger and distrust.  She must become the rebels’ Mockingjay — no matter what the personal cost.

I won’t go into any more detail about the plot because I don’t want to ruin it for anyone who hasn’t read it yet, but I will say I enjoyed how the events played out.  There was a lot I wasn’t expecting, and some I was.  But more than the plot elements, I was enthralled by the characters themselves.  Many of the twists the characters in this book faced were completely unexpected.  I liked watching them grow, understand who they are as people, and make hard decisions.  I liked watching Katniss be Katniss and yet confront even more impossible siutations than before.  I liked watching Gale develop outside of the confines of District 12.  And I loved Peeta and the realizations he is forced to endure (I won’t say any more, but this particular plot element is fantastic).

Ms. Collins has created an elaborate, yet believable, post-apocalyptic-type world where things happen that shouldn’t.  She has created characters that fit in their designated place in that world, but then act in ways no one would believe.  And it is all completely believable.  I get lost in these books.  I love the companionship, bravery, sentiment, friendship, logic, and love.

Perhaps my favorite thing about the book was how it ended.  There was resolution.  I really don’t like when I’ve invested a lot of time and there’s no resolution, when I feel like I’m right back at the beginning.  Now I know that’s just my opinion.  Lots of people love books without much resolution.  I don’t.  With “Mockingjay” I admit to being slightly worried just for a minute.  When I had about ten pages left I was talking with my friend about the book.  She hasn’t read any of them but asked if I liked how the series was going to end.  I told her I honestly hadn’t decided yet.  I had loved the book, loved the characters, loved everything, but even with only ten or so pages left, I wasn’t sure if I was going to get the resolution I wanted.  You’ll understand when you read it.  There were still so many little loose ends I wanted to know about.  Ten pages later, I was convinced.  It was perfect.

And that about sums it up in a nutshell.

I am the author of Siege and Borrowed Magic, YA fantasies filled with magic, intrigue, and romance. View all posts by shariwrites